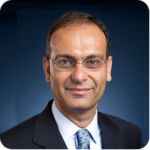 Professor Duenyas’ research interests are in the performance analysis and optimal control of complex production and service systems.  He has widely published articles on production and inventory control, supply chain management, and optimal analysis and control of queueing systems.  He has served or is serving on the editorial boards of several of the leading journals in his field, such as Management Science, Operations Research, IIE Transactions, Manufacturing and Services Operations Management.  Professor Duenyas has acted as the project director in grants totaling more than $2 million from the National Science Foundation and private industry.  He has consulted for and/or done executive courses for many companies such as Alcoa, Ford, GM, Merck, Teva, Schlumberger, GE, Cummins, Continental, Ford, Steelcase, Simmons, Siemens, and others.  He has been awarded a CAREER grant for his research by the National Science Foundation. He is a Fellow of the INFORMS society.

Professor Duenyas is a co-director of a highly successful continuing education certificate program at the University of Michigan on lean manufacturing.  In this capacity, he has taught on site at numerous companies.  At the Ross School of Business at the University of Michigan, Professor Duenyas teaches the core class on operations.  He has been awarded the Executive MBA teaching award by the EMBA students in 2003, 2009, 2010 and 2013.