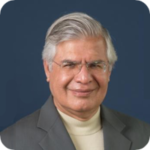 Professor of Strategy; University of Michigan’s Ross School of Business

Professor Aneel Karnani is faculty member of the Strategy group at the Stephen M. Ross School of Business, University of Michigan. He has received the Teaching Excellence Award several times.  He has held visiting appointments to teach in the MBA and executive development programs at many universities including the Northwestern University, London Business School, INSEAD (France), HEC (France), CEIBS (China), Indian Business School, Chulalongkorn University (Thailand), and INCAE (Costa Rica). In addition, he has lectured in several other countries in Latin America, Middle East, Europe and Asia. Prior to joining the University of Michigan’s faculty in 1980, he obtained his doctoral degree from the Harvard Business School.  He also holds an MBA and B.Tech. (Electrical Engineering), both from India. Professor Karnani’s interests are focused on three topics: strategies for growth, global competition, and the role of business in society. He studies how firms can leverage existing competitive advantages and create new ones to achieve rapid growth. He is interested in global competition, particularly in the context of emerging economies.